Tim Flagler makes this easy-to-tie pattern for catching salmon and steelhead. Add it to your fly box and enjoy some hot fishing action.

Follow along in the video below for detailed instructions for tying a Hoh Bo Spey fly. This is part of a series of Tim Flagler’s collaboration with Fly Tyer magazine. Check out his article about the fly in the Fall 2022 issue of Fly Tyer magazine.

Charles St. Pierre developed the Hoh Bo Spey for catching salmon and steelhead on the rivers of the Pacific Northwest. It’s actually named for two of St. Pierre’s favorite rivers, the Hoh and the Bogachiel. Over the years, the pattern has become a staple for many Spey-casting anglers, and its reputation as a fish-getter has spread to the four corners of the globe.

The reasons for the Hoh Bo Spey’s popularity are clear: it is relatively easy to tie, it casts like a dream, and you can make it in a nearly infinite number of color combinations. Furthermore, you can make the Hoh Bo Spey in a range of sizes to target fish other than salmon and steelhead. This pattern also works remarkably well as a tube fly.

When cast down-and-across stream and swung through the current, the materials in the Hoh Bo Spey come alive. Each ingredient contributes its own special realistic markings, flash, translucency, and movement. Think of the Hoh Bo Spey as a group of individual instruments playing together in harmony to produce music that’s greater than the sum of its parts.

What You’ll Need to Tie the Fly

The foundation of a Hoh Bo Spey is most often a Waddington shank, but Intruder shanks and cut shanks also work well; experienced tiers will see the possibilities for tying the pattern as a tube fly. I prefer connecting the shank to a trailing hook using Berkley FireLine, but Intruder wire or even fly-line backing also work. An Intruder-style hook with a short shank and upturned eye is standard on this pattern; Ahrex, Owner, Gamakatsu, Partridge, and other manufacturers all offer this type of hook. The body of the fly is generally produced using either one or two colors of Ice Dub or a similar material. Many anglers prefer Hoh Bo Speys with brightly colored butts and somewhat darker bodies.

Spiral-wrap a single Guinea hen feather over the body; either fold the feather or strip the fibers from one side of the quill before wrapping it. The color of this feather should complement the other colors used in other parts of the fly. The Guinea feather is attractive and helps support the marabou collar in front of it.

The marabou fibers should be long enough so the tips extend all the way to the point of the trailing hook. It’s very important to keep the marabou collar sparse; two to four wraps should be enough, depending on the quality of the marabou feather..

Tie a little flash material onto the top and the sides of the fly in front of the marabou. The rear tips of the flash should extend just a bit past the bend of the hook. Finally, tie on six fibers from a Lady Amherst tail feather. The movement of the fibers, plus their beautiful markings and the contrast they create with the rest of the fly, make them almost essential. Regardless of where you fish for salmon or steelhead, be sure to carry a selection of Hoh Bo Speys.

Tim Flagler is a leading fly tying and angling instructor. He is also a guide and leads groups to some of the very best fishing in the world. To learn more, go to his website, tightlinevideo.com. Tim lives in New Jersey. 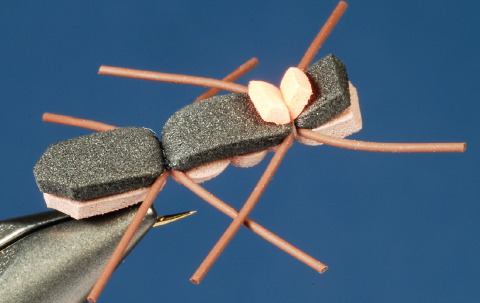