Pack a kayak with a minimal amount of gear and head into the Everglades!

Mike Conneen started the entire affair with an email. I read his correspondence eagerly; it had been way too long since I participated in a real fishing adventure.

Mike wanted to circumnavigate Florida Bay using kayaks. I thought that was a little too ambitious and countered by suggesting a two-part trip, first to Cape Sable (a four-day paddle) and then to Shark Point (an overnight trip). Mike agreed.

I could write many pages about this trip, but I’ll hit only the high points to give you a flavor of what it is like exploring the Everglades using a kayak. But I must leave space for fishing information and flies. In brief, this is what I saw.

We launched our kayaks at Coot Bay Pond on a sunny Monday morning. Our destination was Cape Sable. Mike and I had similar goals, and some differences. Mike wanted to catch a 30-inch-long snook, and to catch a fish with a fly rod, something he had never done. I wanted to catch a sea trout, redfish, snook, tarpon, and crevalle jack, all on flies. Mike carried a spinning rod and a seven-weight fly rod; I had only a six-weight fly rod.

We’d been out about an hour when I spotted a snook laid up in only 10 inches of water. I cast a Gurgler about a foot in front of the fish. I popped the fly once, the snook charged, and the fight was on!  Releasing that fish was very satisfying and an auspicious beginning to our trip.

We continued paddling and exploring, but I blew out every other fish I saw in the bay. The water was dirty, it was real windy, and the fish were hard to see. We reached the end of the bay and paddled through a tiny overgrown tidal creek into another bay. The wind was blowing hard from the east, and although we were heading west, the wind and waves precluded fishing in this area.

We passed through another creek into a small pond. The water was murky and I again spooked every fish I saw; I couldn’t see them until I was on top of them. Mike cast blindly without success. Not knowing it was there, Mike hit a snoozing crocodile with his kayak. The 10-foot-long panicked reptile threw water and mud in every direction.

As the day wore on, we became more concerned with navigation than fishing. The sun was low in the sky and we didn’t want to spend the night in the kayaks. With the help of his telephone GPS, Mike found a small patch of dry land just as dark was settling in. My dinner that evening was a granola bar and an orange. We were roughing it, yet having a great time.

On the morning of the second day, a five-foot-long shark found my kayak an object of curiosity, and he passed by closely. At least I saw him coming.

We came to a place where there were at least a dozen large crocodiles lying on a mud bank. Our appearance sent several of the beasts scurrying into the water; the rest just remained where they were, unconcerned.

At the next creek, the current flowed hard in the wrong direction. We ate lunch, and then Mike took a cast. Bam! A nice snook! He got five fish on six casts. Using a Clouser Minnow, I caught a jack and small snook. The current then slackened and we paddled down the creek. We camped that night and the next evening on Cape Sable. We were enjoying a great trip.

In the morning, we paddled back to the spot where Mike caught his snook. This time I caught a small redfish using a pink Clouser Minnow, as well as a couple of snook. Mike rigged his fly rod and hooked two snook using Clouser Minnows. The first fish broke the tippet, but Mike boated and released the second snook. How many people can say their first fish on fly was a snook? 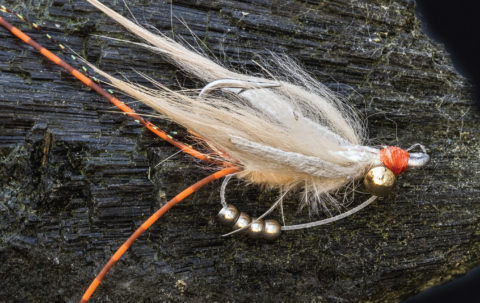