Tie these wets this winter and you’ll find hatch-matching success.

We think of wet flies, when we think about them at all, as attractor dressings, most useful when no hatch is happening, when we can’t figure out what trout might be doing, when we need to locate trout before we can catch them.

Most often, we employ a wet fly on the swing, or as often a brace of them, to search out the trout, bring a few to hand, while we wait for the situation to develop more favorably for dry flies. But wets, if carefully chosen, can be fished as imitations before, after, and even in the midst of major insect hatches.

As an example, my friends and I fish the March Brown mayfly hatch early every spring, mostly on Oregon’s McKenzie River, but also on the Deschutes, the Yakima in Washington, and later, higher in the Rockies, on the Henrys Fork of the Snake in Idaho. It’s a widespread insect, anticipated because it’s the first fairly large mayfly to bring up trout every season.

Naturally, we prefer to fish it with dry flies, since it’s the earliest great dry fly fishing in the average year.

The problem is, the March Brown hatch can be very short. On rainy days, it might provide an hour or two of dry fly fishing, with duns on the water and trout eager to take them. On sunny days, the heavy part of the hatch might last no more than half an hour. That’s brief if you’ve driven a couple of hours, launched a boat, and floated half the morning to where you know the hatch will happen.

Many years ago, Rick Hafele, coauthor of Western Hatches, created his March Brown Flymph to imitate the emerging natural. We began to notice that trout in the riffle habitat of the natural nymphs would be more than willing to whack Rick’s wet fly a couple of hours before the midafternoon hatch started. Sufficient

drowned duns littered the currents to  keep trout interested in the same sunken imitation for an hour or two after the hatch ended. On many March Brown days, fishing wets more than doubled the amount of time we fished, and not coinci- dentally, the number of trout we caught.

The March Brown Flymph, in size 12 and 14, is specific for the hatch. Syl Nemes’s March Brown Spider soft-hackle fishes almost as well, and might be more likely to be found in your fly boxes. It’s my favorite generic searching wet fly, one I wouldn’t want to be without on any stream, at any season.

A second example of wet flies fished as imitations of a specific hatch showed up first on the big and brawling Deschutes River during late spring and early summer hatches of yellow sally stoneflies. It has since been employed on rivers scattered all over the country.

These insects sometimes seem to emerge out in open water, violating all the laws of stonefly emergence, which decree that they crawl out on streamside boulders or vegetation before the nymph transforms to the adult. Some observers swear that yellow sallys emerge from the depths, but it’s most likely that the egg-laden females drop to the water to deposit their eggs and are taken under by the currents. Those that seem to be emerging are most likely struggling to escape from the same water where they’ve laid their eggs.

The jury is still out on the reason for yellow sallys seeming to emerge on runs and flats of medium-sized to large rivers, but the reaction of the trout is less difficult to figure out. After years fishing the hatch with dry flies, enjoying success that was moderate at its best, I came across a gorgeous description by Ernest Schwiebert, in his book Nymphs, of using a size 12 or 14 Light Cahill wet fly during a yellow sally hatch on his Michigan waters. I applied the lesson to my own home rivers, and was astonished at the change in my results.

Watch the video to learn how to tie the March Brown

The wet, which sinks slightly but never gets deep, can be fished in one of two ways, quite often on the same cast. The first is to cast it to rising trout, exactly as if it were a dry fly. Place the fly two to four feet upstream from a specific trout.

Watch the water for a rise, or a twitch in your line tip or leader. Whatever the trigger, set the hook. If no trout takes in the dead-drift portion of the presentation, then coax the wet fly into a slow swing, down and around on the current. Mend  to slow it. Let it hang when it’s straight below you. Trout might take the wet fly on the drift, during the swing, or even as it hangs on a tight leader.

An alternative to the Light Cahill is a size 12 to 16 Partridge & Yellow soft-hackle, an excellent exploring dressing that also works well during the yellow sally hatch. Both serve just as well for the nymph as they do for the ovipositing adult.

A third example of wet flies employed as imitations first came to me on Montana’s Big Hole River in the aftermath of an early fall BWO hatch. The size 16 insects came off in a long run just downstream from a broad, choppy riffle. My wife, Masako, and I fished BWO drys over them for several afternoon hours every day. We caught sufficient numbers of trout that Masako would hike back to the car to take a nap as soon as the hatch ended.

I did not. The first day, when rising trout subsided after the hatch, I suspended an aquatic net in the water, pulled it up, and discovered the currents were still loaded with duns that had not managed  a successful launch in life. Sporadic trout continued to work the currents. It was easy to see what they were taking.

I nipped off my dry fly, replaced it with a simple size 16 Krystal Flash

BWO Soft-Hackle, began casting it out, letting it swing slowly through the same water where we’d so recently fished our dry flies. That first day, and on many subsequent days, I caught as many trout on the wet fly after the BWO hatch as I’d caught earlier when trout were happy to take drys. An excellent substitute for the bright-bodied little soft-hackle is the more traditional size 14 or 16 Waterhen Bloa.

I often fish them together. Trout seem to take them with equal enthusiasm.

These are just examples of situations in which wet flies work well as imitations for specific hatches: the March Brown Flymph or March Brown Spider for the March brown mayfly; the Light Cahill or Partridge & Yellow for the yellow sally; the Krystal Flash BWO Soft-Hackle or Water-hen Bloa for drowned BWO duns in the aftermath of a heavy olive hatch.

It would be an excellent winter assignment to tie up a small box of wet flies: a few Flymphs, some winged wets, and perhaps most important, a selection of soft-hackles. They would prepare you to extend the time you find enjoyable during these and many other aquatic insect hatches. It’s likely they’d also catch you quite a few extra trout during the average day spent on a stream. 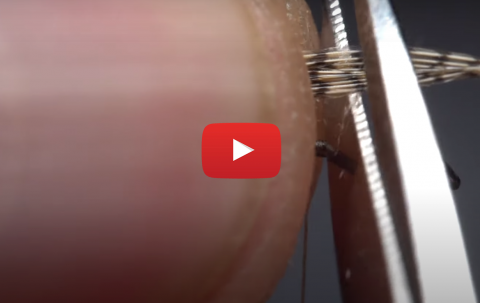