For example, she introduces us to Archer Poor Jr., a historian and angler from Andover, Maine. Poor has fished the Rangeley region for most of his 90-plus years, and he was lucky enough to get some fly tying pointers from Stevens herself. Yes, you heard that correctly: Despite the popular myth that Stevens shared her knowledge with no one, she did help Poor get started tying flies.

Junior Poor is also a fan of a style of streamer known as the Wounded Minnow. This fly might startle modern tiers because it has a feather wing placed on only one side of the hook. This unorthodox construction is a strategic feature: It “makes the fly twist and turn like a struggling baitfish when it’s retrieved,” Sharon reports.

“He shared that with me in the interest of people fishing his patterns,” she says. “He wanted that to be his fly tying legacy. He wanted people to use these flies and catch fish with them, so I feature these in the book as well. I also give complete instructions for tying traditional tandem-hook streamers; these are real New England classics used for trolling large bodies of water.” 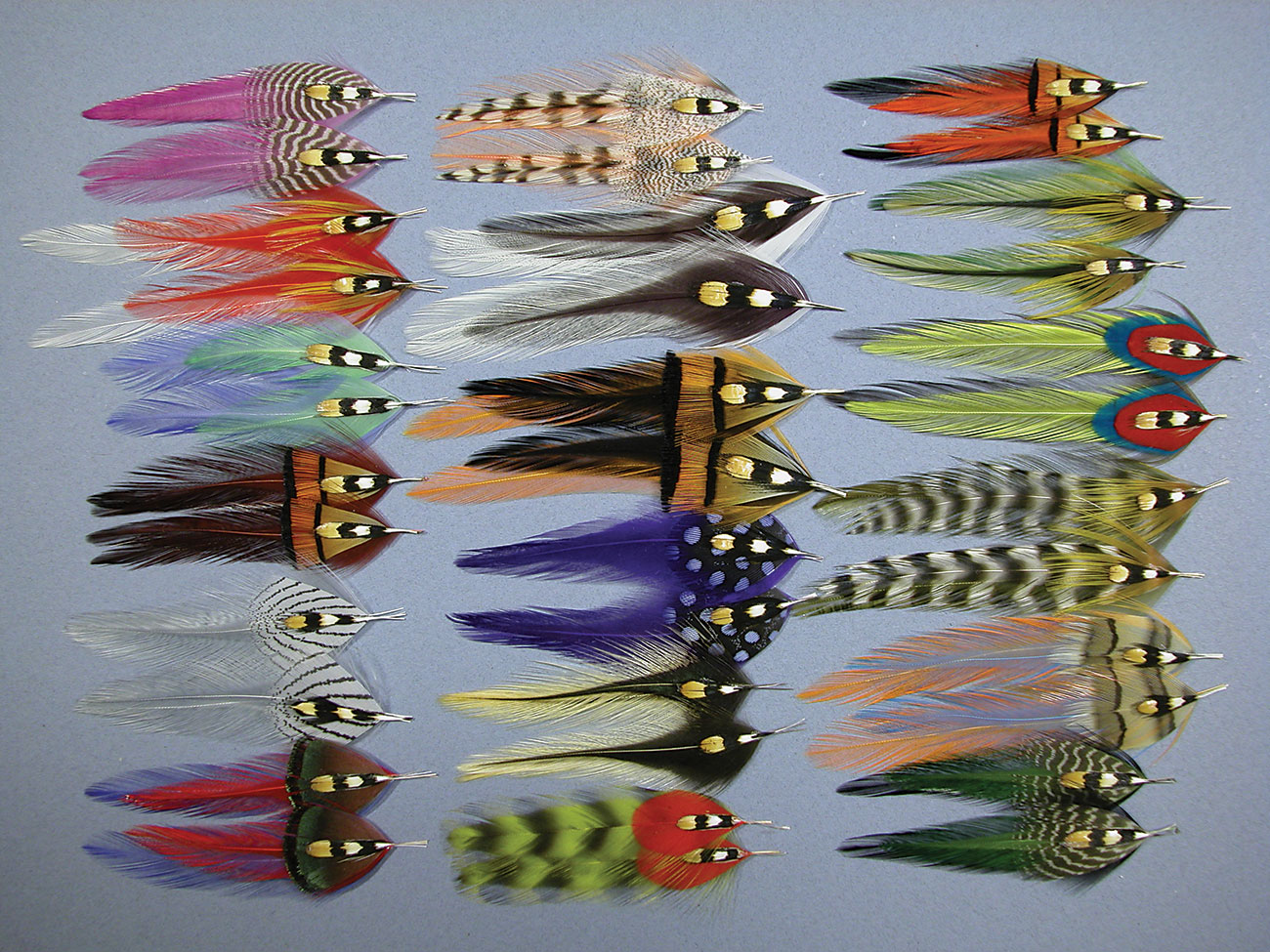 Even though the dismantling of the Blue Devil will get tongues wagging, that’s just one small part of this very complete book. In Tying Heritage Featherwing Streamers, Sharon presents detailed, exquisitely illustrated chapters on hooks, tools, furs and feathers, and the important tying techniques you must know in order to construct these patterns. There’s an extremely informative chapter on making pre-assembled wings, one of the hallmarks of this style of tying. Sharon then walks us through the entire tying process for making an original smelt pattern she calls the Black Pearl. Follow her methods and meticulous instructions, and you’ll be making frame-worthy flies in no time.

Sharon also shares many of her favorite tying tips that you will use to make better feather-wing streamers and many other styles of patterns. For example, you will discover how far the tip of a feather wing should extend past the hook bend (hint: it has to do with the hook gape), how to get unruly feathers to behave (check out her neat trick for flattening a curly mallard flank feather), how to salvage a split jungle cock feather, how to use a clothes iron instead of a steaming teakettle to straighten hackle feathers, and much more.

Are You Up to the Challenge?

It’s surprising how few of the more common classic established streamer patterns are featured in Tying Heritage Featherwing Streamers. Wright doesn’t view her subject as something locked in the past. Remember, she is an artisan, eager to push the boundaries and create new flies. If you read Sharon’s magazine articles or follow her online (www.sharonewright.com), you already know that she is always designing new patterns. But Sharon doesn’t just slap some materials on a hook, give it a name, and call it a new fly. Each of her original patterns is designed with the purpose to commemorate something unique or memorable.

Sharon included an entire chapter describing some of her original flies. For example, there is the State of Maine Streamer, which was debuted at the American Folk Festival in Bangor, Maine; she designed this lovely fly to represent the official symbols of the State of Maine and elements of the state flag. There is also the Joshua Chamberlain, named for the general who was awarded the Medal of Honor for his bravery leading the 20th Maine Infantry Regiment at the Battle of Gettysburg. The list of her personal—and inspired—patterns goes on. Sharon shares tips and ideas for creating original flies, challenging us to design our own patterns to commemorate the important moments in our lives. Are we up to the challenge?

Tying Heritage Featherwing Streamers concludes with a breathtaking gallery of photos and complete recipes for more than 100 additional patterns. This gallery, featuring flies tied by tiers from around the world, is a font of inspiration for anyone interested in beautiful streamers.

While it’s tempting to think of Tying Heritage Featherwing Streamers as the last word on this subject, Sharon doesn’t see it that way. She says there’s still plenty of history to unearth about the tiers and methods of that period.

“I’m sure that as time goes on, we will discover more old streamers, techniques, other tiers, and stuff we didn’t know,” she said. “I didn’t write this book believing that it’s all-inclusive, because I don’t think that’s possible. Who knows, maybe there will be another book down the road—Part Two: The Continuing Saga. I’m still finding more information about how things came about. I don’t think the story has ended.”

Morgan Lyle is this magazine’s official investigative reporter. (His byline has even appeared in the New York Times.) Morgan lives on Long Island.

originated and tied by Lee Schechter

originated and tied by Paul Rossman

originated by Carrie Stevens as tied by Roger Plourde

originated by Herb Welch as tied by Chuck Kashner

originated and tied by Scott Murdock

originated by Carrie Stevens as tied by Al Ritt

originated and tied by Anthony Smith

originated by Ray Bergman as tied by Bob Petti

originated and tied by Monte Smith

Night Time Is the Right Time