THE FIRST ATLANTIC SALMON I EVER HOOKED was on a big ugly dry fly called a Carter’s Bug. A legendary local fly shop owner named Bryant Freeman tied it. I was on the Southwest Miramichi River, fishing a deep slow pool, and I was on my fourth or fifth pass when a large salmon rose and missed my fly. I caught my breath and tried my best to replicate my last cast. This time the salmon engulfed the fly. The fight might have lasted 30 seconds or five minutes, I couldn’t tell you afterwards, but three beautiful leaps later, and the Carter’s Bug came twirling out of the salmon’s mouth. The “king of fish” was gone.

I can’t imagine a better day on the water than casting dry flies onto a likely lie. I even get excited when I see another angler tie a Bomber or bushy dry fly to the end of their leader and make their way to the pool. There is something mesmerizing about a fly’s landing gently on the water’s surface and then drifting with the current. The anticipation of that brief moment when a salmon rises to the surface to take the fly with a swoosh is intoxicating.

There are dozens of books about dry fly–fishing techniques written by better anglers than I, so I won’t say more than this: All the usual dry fly methods can be effective under the right circumstances. Upstream, across-stream, and downstream dead drifts, as well as skating or swinging a dry fly down and across to create a wake, all catch fish. If a popular stretch has been heavily fished with wet flies, a big dry fly just might be the ticket to enticing a salmon to rise.

The Wulff series of patterns comprises some of the most famous dry flies for Atlantic salmon and even steelhead. Lee Wulff first developed the White Wulff, Gray Wulff, and Royal Wulff patterns for trout fishing in 1930, and he later used them for catching Atlantic salmon. Dan Bailey completed the series with the Brown Wulff, Black Wulff, Grizzly Wulff, and Blonde Wulff. Countless more variations have been created over the years as tiers adjust the patterns to fit their special needs and tastes.

Bombers, I believe, are now the most widely used dry flies for Atlantic salmon, and you’ll also find them in the fly boxes of many steelhead anglers. They are highly effective and easy to keep afloat. Designed in the 1960s by Reverend Elmer Smith for use on the Miramichi River, they are now tied in every imaginable combination of colors. (Historical note: In an interview with the late fly tying great Warren Duncan, of Saint John, New Brunswick, Reverend Smith said he got the idea for the Bomber while watching a young boy catching sea-run brown trout using a deer-hair mouse on Maine’s York River. —Editor.)

Fishing dry flies isn’t necessarily a better or more productive method; it’s just another technique to add to your repertoire for when the conditions are right. They are also a lot of fun to tie during the long months between fishing seasons.

Lloyd Lutes is a regular contributor to this magazine. His amazing flies have appeared in many books and magazines. To see more of his fine work, go to his website, www.salmonflies.webs.com. Lloyd lives in New Brunswick, Canada. 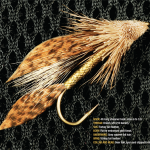 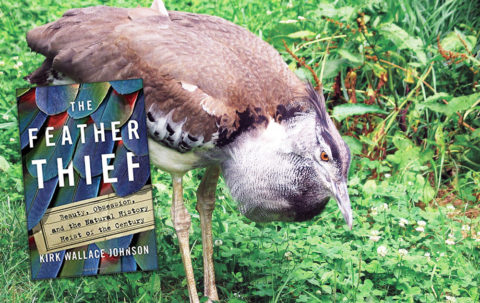 THROWBACK: The Case of the Purloined Pelts