To say Greg Senyo is one of today’s most influential fly tiers doesn’t do him justice; Senyo is among the most innovative tiers of all time. He wasn’t the first to tie with synthetic materials, but his influence in popularizing their use arguably makes him the father of these ingredients.

Senyo cracked the code in combining natural and synthetic materials to create patterns with profiles and actions never seen before. With his unique approach, he has created flies steelhead anglers from Alaska to the Great Lakes won’t leave home without. Senyo has also invented dozens of materials found in fly shops around the world. Chances are if you dig through your own stash of tying materials, you’ll find packages emblazoned with his name: Laser Dubbing, Predator Wrap, Fusion Foil Legs, Shaggy Dub, Fish-Skull Shanks, Aqua Veil, and more. From the extended shanks to the materials he uses, Senyo has thought long and hard about every aspect of his tying.

You wouldn’t think someone on the cutting edge of fly tying would pay much attention to its past, but Senyo credits part of his success to his reverence for history, formed at an early age in Girard, Pennsylvania, near storied Elk Creek.

“I spent a lot of time at Folly’s End Fly Shop and was lucky that Clyde Murray, a local fisherman and tier, took an interest in me. He taught me the basics of fly tying: egg flies, Woolly Buggers, and stoneflies. I was lucky to have that opportunity.”

“He introduced me to Matt Supinski [author of Steelhead Dreams], and I started traveling to do more fishing and meeting other tiers. Those were the days when you had to go see people to learn their techniques. Being a young guy, meeting people like Dave Hughes, Jerry French, and Michael Bennett was very influential.”

Senyo tied many of the patterns he sold using a local material called Laser Yarn. When the manufacturer passed away, Senyo wanted to pay homage to a fellow tier and keep the material alive. This led to his first breakthrough.

“Ed Bordus was a local guy who had a tremendous impact on our fishing community. He manufactured Laser Yarn with a machine he had made himself. It was goat wool dubbing that was vital to a lot of the flies we tied. When he died, that material slowly faded away. I wanted to pay tribute to him and that material, and that led to Laser Dub.”

“I had no idea how the process worked. I just sent them the material and gave them the background of why it’s important. They found it viable and began selling it. It’s still doing well today, and this gave me the springboard to work on other materials.”

To say it did “well” is a gross understatement and speaks to Senyo’s humility. Tiers found hundreds of uses for Laser Dub in everything from saltwater flies to streamers and dry flies. Tiers such as Kelly Galloup, Rich Strolis, and Mike Schmidt used it to create many of their signature patterns. It has uses for making wings, collars, dubbed bodies, and veiled-style heads, and it has gained a cult following among steelhead anglers. Senyo could have been satisfied, but he was only getting started.

Ryan Sparks is a prolific freelance writer who contributes to many titles; including Fly Tyer, American Angler,  Fly Fusion and MeatEater. To view more of Ryan’s work go to flywatermedley.com 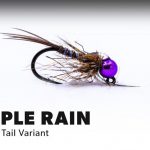 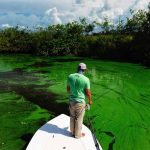