“Albies” are as strong as bulls and as fast as racehorses. Autumn is prime time to catch these ocean-going speedsters.

FROM NEW ENGLAND TO NORTH CAROLINA, the warmest ocean water temperatures of the year occur sometime around the end of August. It is not uncommon for surface temperatures to push into the low to mid 70’s. This rise in temperature occurs because the Gulfstream moves closer to shore. The warm water attracts false albacore, and we enjoy some of the very best angling of the season.

False albacore first appear in New England—usually around Martha’s Vineyard—and over the next several weeks they work their way south to Wilmington, North Carolina. Why all the excitement, you might ask?

For their size, false albacore are some of the toughest game fish in the ocean. They readily take flies, and you can catch them in great numbers. False albacore go by many names: greenies, apple knockers, bonita, core, fat Albert’s, little tunny, or just plain “albies.” Whatever you call them, false albacore are one of God’s great gifts to saltwater anglers, especially fly rodders.

Fishing for false albacore is incredibly fun. First comes the hunt for the fish. Look for terns and seagulls diving on the water’s surface; this is a good sign that albies are tearing through a school of baitfish. A false albacore “blitz” is a memorable experience. It is so visual and exciting that you will relive the event long after the day is over.

Aggressively feeding albies readily take flies. They are so eager, in fact, that sometimes you will look around and see several anglers fighting fish at the same time. And false albacore are also some of the hardest fighting fish in the ocean. While their shape and other characteristics make them look like tuna, they are not; false albacore are in the mackerel family, hence the name false albacore. False albacore meat is mostly red, much like the color of blood, so they have limited value as table fare. This is great news for anglers because most fish are caught and released to live and fight another day.

Hooking and fighting an albie on a fly rod is one of the most memorable angling experiences you will ever have. They run fast, hard, and long. Line will scream off your reel; an albie will put you into your backing in a only a few seconds. And pound for pound, few fish fight as hard as false albacore. If you could tie a rope to the tail of an 8-pound false albacore, and tie the other end to an 8-pound bonefish, the albie would pull the bonefish all over the ocean!

Look for false albacore as far north as Cape Cod to as far south as Florida and into the Gulf of Mexico. While their arrival in certain areas varies, when they do show up we enjoy an inshore angling bonanza.

Autumn is prime time for false albacore fishing. The length of their stay is based on the temperature and clarity of the water. Albies do not like dirty water, and they do not like particularly cold water. They may hang around New England for upwards of two months beginning sometime near the end of August, but they usually remain for about four to six weeks.

Look for large schools of false albacore around Cape Cod and Martha’s Vineyard in Massachusetts to Point Judith and Watch Hill, Rhode Island. Follow their migration as they head south to the waters off New York, New Jersey, and points beyond. Look for big schools of hungry albies around Block Island (Rhode Island), Montauk (New York), and Sandy Hook (New Jersey).

The best false albacore fishing in the country is along the coast of North Carolina. Ground Zero for fly fishing for albies takes place near the sleepy little fishing village of Harkers Island, North Carolina. Located at the southern end of the Outer Banks, Harkers Island draws anglers from across the United States to enjoy the fantastic fishing.

Angling writer Tom Earnhardt helped popularize the false albacore fishing on Harkers Island starting in the early 1990’s. Every year he and Jones Brothers Marine put on what they call the Tuna Melt. At the Tuna Melt, which occurs the first weekend in November, hundreds of anglers come to Harkers to fish, enjoy a pig roast, and commiserate with one other. Anglers trailer boats, hire guides, or take a ferry out to Cape Lookout to fish an area called “the Hook.” False albacore show up along North Carolina starting in September and remain through December if the water remains clean and the temperatures are relatively mild.

Finally, look for false albacore from South Carolina to Florida and into the Gulf Coast. The fish show up at different times in Florida. On the East Coast, the fishing seems best from July through September, while on the Gulf Coast the best fishing is from late winter through early spring.

Tackle selection for false albacore varies depending upon the size of the fish. A seven- or eight-weight rod is ideal for catching juvenile albies in the four- to six-pound class. For fish in the seven- to 12-pound class, a nine-weight rod is the best choice. When you get into the big boys weighing up to 20 pounds, a 10-weight rod will be fine but might not feel stout enough!

Once you battle with Albzilla, you will realize just how mean and tough these fish can be. The choice of reel is simple: it must be capable of stopping a pickup truck pulling onto the freeway. Select a large-arbor reel with a smooth drag, and it must have the capacity to hold at least 200 yards of backing.

I am always prepared with several fly lines. I always take a slow-sinking intermediate line and a fast-sinking integrated shooting head. Today, all the fly line companies make nice lines for false albacore fishing, but the RIO Outbound Short F/I is my go-to line when fishing from a boat or the beach. This line has a floating running line with an intermediate slow-sinking head that allows me to quickly pick up and change casting directions. If you are fishing a beach with a lot of breaking waves, however, a full slow-sinking line might be a better choice; the wave action can pull your line back onto the beach, so a line that is completely underwater can help prevent this.

As for terminal tackle, I always prefer a 9- to 10-foot-long fluorocarbon leader because there are times when the bait is so small and the water is so clear that a stealthier, longer leader yields a few extra strikes. When the fish weigh 12 pounds or less, a 12- to 15-pound-test leader works just fine; if the albies are bigger, I use a 20-pound-test leader

Fly selection is the final piece of the puzzle. Like any other fishery, the available forage determines which patterns work the best. The bait varies from region to region; at times, it can even vary from beach to beach. I remember albies eating tiny bay anchovies at Watch Hill Light, Rhode Island, and the anglers just down the road at Weekapaug Breachway, in Westerly, Rhode Island, were seeing fish tearing into silversides.

Do some research before packing your fly box. Call a local fly shop or do on online search to obtain up-to-date reports. One thing is for certain: false albacore feeding patterns can change on a dime. During one tide the fish might be gorging on glass minnows, and after the change of tide they will be ripping through peanut bunker. Silversides (glass minnows), bay anchovy’s (rain bait), peanut bunker, sardines, small mullet, and even squid are all common foods for albies. These fish are opportunistic feeders, so you might even see them eating small crabs and sand eels. There is even super-small bait in the Carolina’s the locals simply call snot bait.

Using a very fast retrieve is the key to catching false albacore. The water is crystal clear so they can get a very good look at your fly. Long quick strips, short quick strips, or even a two-handed retrieve (with the rod tucked under your arm) work most of the time. Your fly should look like it is fleeing or panicking. Everyone has his favorite flies, but this varies from region to region. Anglers in New England through the mid-Atlantic use smaller flies measuring 1 ½ to 3 inches long. Folks fishing the Carolina Coast carry flies measuring 1 ½ to 5 inches long. Florida anglers, however, prefer larger patterns measuring 3 to 6 inches in length.

This thumbnail sketch will get you started fishing for false albacore. The fish are spread along almost the entire Atlantic Coast. It is a terrific and exciting way to conclude the fishing season.

Henry Cowen is a regular contributor to this magazine. He is a fine fly designer and expert angler. Henry lives in Georgia. 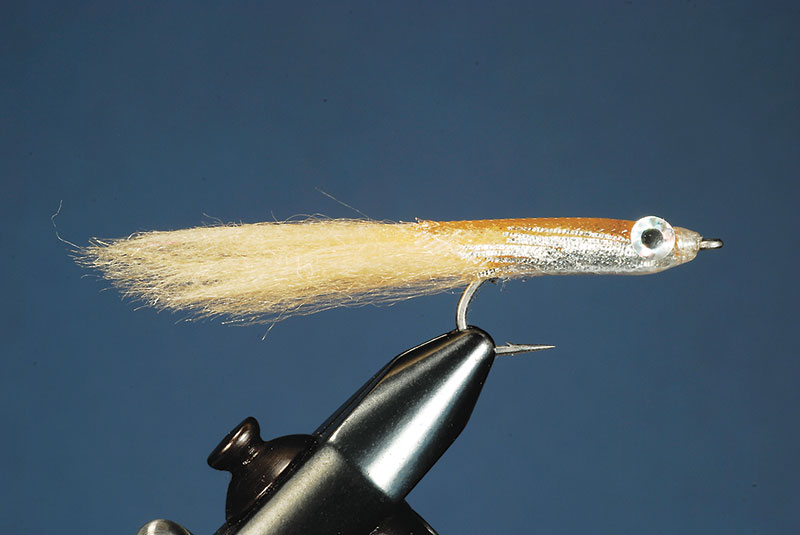 Hook: Mustad 34011, size 2.
Thread: White 3/0 (280 denier).
Tail: White bucktail.
Flash: Flashabou and Krystal Flash.
Body: Closed-cell craft foam.
Eyes: Adhesive eyes.
Glue: 30-minute epoxy.
Note: Capt. Joe Blados’s Crease Fly is my favorite pattern for getting false albacore to eat off of the surface. It has been a mainstay topwater fly for more than 20 years, and the albies never get tired of it. 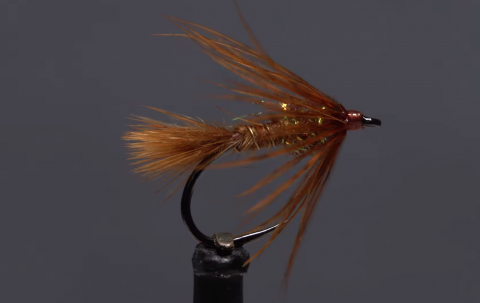