Do the thread sizes listed in pattern recipes confuse you? Selecting the proper thread is far easier than you think.

For decades, the diameter of fly tying thread was listed in “aught” sizes: 8/0, 6/0, and 3/0. Size A was also once a common fly tying thread; it was very thick, suitable for making very large streamers and saltwater patterns.

Generally speaking, there is nothing inherently wrong with this system. Size 8/0 is usually the thinnest thread available; we select this thread for tying midges, dry flies, and small nymphs. Tiers specializing in making full-dress Atlantic salmon flies are fanatics about making tiny heads on their flies, and they usually complete their beautiful patterns using size 8/0. Today, many fly shops also carry size 14/0, which is almost gossamer; use it for making midges and dainty floating flies.

Size 6/0 is always the workhorse thread; we use it for making most of the patterns in our fly boxes: nymphs, freshwater streamers, beefier dry flies, and smaller saltwater patterns. This thread is stronger than size 8/0 so you can apply more tension when lashing materials to hooks. 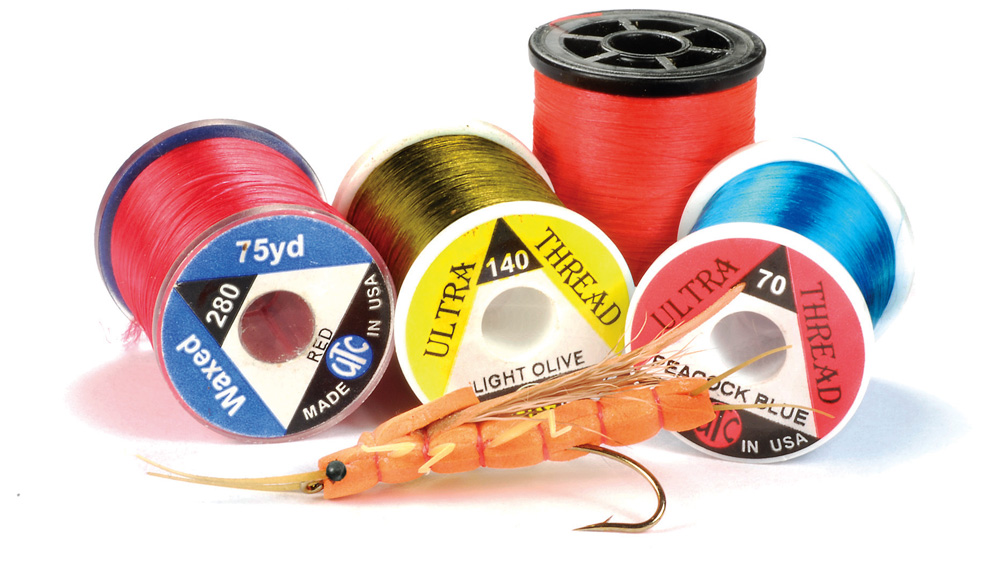 Experienced tiers also use size 6/0 for doing thread-straining work such as spinning deer hair heads on Muddler Minnows; most recipes call for size 3/0 for spinning deer hair. Did you know that you can increase the breaking strength of tying thread? Spinning your bobbin clockwise twists the thread much like string, rope, or cable. Tightening the strands increases the tensile breaking strength of thread so you can apply more tension to spin deer hair or tightly lash thick hair wings to hooks.

Those are just general rules of thumb about selecting thread. There’s no mystery once you understand the nomenclature of thread sizes. But then along came a guy who threw a wrench into our fly tying works and said we should adopt a new, more exact sizing standard.

Check out the pattern recipes in this magazine. You’ll notice that the thread recommendations include the aught size and something called denier. Denier is a unit of weight used in the textile industry to measure the linear mass density of fibers. Originally, denier was based on a natural reference: a single strand of silk. To be more specific, a 9,000-meter-long strand of silk weighs about one gram. (I’ll let you figure out how many miles of silk that is!) We can apply this concept to almost any type of textile, including fly tying thread.

In fly fishing, there are few industrywide standards for comparing the size and weight of tackle and fly tying materials. For example, the thickness of one company’s size 8/0 thread might differ from that of another supplier. Denier gives us an exact method for comparing the thicknesses of different threads.

Use the accompanying chart to help determine what thread to use to tie different styles of flies. This chart is not comprehensive, but it is a good start for deciphering thread size.

Porter House is a retired translator, prospector, archeologist, international businessman, and more. He also ties one hell of a mean fly. Porter has fished and hunted on six of the seven continents, and he has a treasure chest of photographs supporting all his claims. “There’s nothing to catch or kill in Antarctica,” he commented. “I was there twenty years ago for the government. I spent two weeks brushing the frost from my beard. Nasty place.” Today, Porter lives on his sailboat in the Florida Keys. “It’ll work for now,” he says. We’re not sure what he means: being retired or living in the Keys?