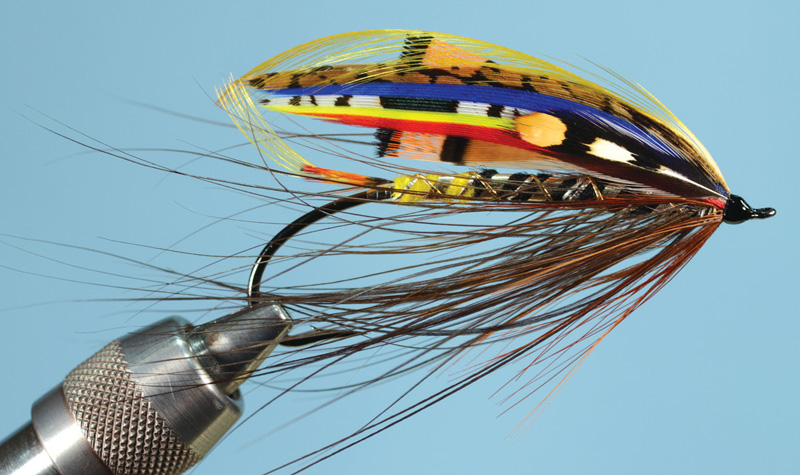 While Spey flies were evolving in Europe and Canada, American tiers paid very little attention to them. I have many tying books from the first half of the 20th century, and I can find no mention of them. For example, J. Edson Leonard’s compendium of fly patterns, titled Flies, which was published in the 1950s and is still considered a major resource for understanding the history of fly tying, contains no mention of the Lady Caroline or other Spey flies. And in 1970, Joe Bates devotes only three pages to Spey flies in his book Atlantic Salmon Flies and Fishing. This all changed with the appearance of Syd Glasso.

Syd Glasso fished for steelhead in the Pacific Northwest since the 1950s. He adapted classic Spey flies for use on his favorite rivers. One of his flies, the Brown Heron, was nothing more than a traditional Spey fly tied in flashier colors. Glasso, however, took it even further: he added streamer-style wings to his Spey flies. Although these wings use cock hackle tips tied in a sort of classic streamer configuration, they are more tented and set lower than typical streamer wings. Glasso’s popular Orange Heron is a good example of this style of tying. Charlie Dickinson’s Purple Heron is an even more modern pattern based on Glasso’s Orange Heron.

Art Lingren, from British Columbia, is a devotee of Syd Glasso’s. A noted author, he developed more than one fly in Glasso’s style; his pattern called As Specified 1 appears in his book Flies of British Columbia. and the Black Spey, which is another of his flies, uses an Indian crow feather in a unique manner in the tail for a hot spot.

As time went on, Spey flies became more loosely defined; today, it seems a Spey fly is anything with a long, flowing hackle. While we will stick to the standardized form a little more closely, there have been constant variations. For example, Rob Taylor, also of British Columbia, used golden pheasant crest breast feathers to solve a problem he was having mounting Syd Glasso’s hackle-tip wings; Rob tied them flat over the top of the fly, a simple solution based on the General Practitioner. Syd Glasso himself varied the throats and wings of his own flies, and sometimes used feathers other than teal or widgeon. The Sol Duck Spey uses black heron for the throat, and his Black Heron has black goose quill slips for the wings similar to a classic wet fly.

The drooping jungle cock eye is another western variation. I believe the idea is to make the fly resemble a shrimp or prawn. It has its roots in Murdock’s Dee fly, called the Dunt, from the 1800s.

A Note About Spey Hackle

Before tying any flies, we must first look at the type of long-fibered hackles used on Spey flies. Heron feathers are the traditional hackle, but processing these is illegal in the United States. The most common substitute is blue-eared pheasant feathers, which are available through online retailers; most fly shops do not carry such a specialized material. Blue-eared pheasant is a wonderful ingredient containing a slender stem that needs no soaking, has long fibers, and good coloration. You can purchase or dye blue-eared pheasant in a variety of colors. The only downside is that blue-eared pheasant is sometimes hard to find, it is expensive, and the stems are short. It is impossible to wrap one of these feathers the entire length of the body, so modern tiers don’t even try; simply spiral-wrap the feather over the front half of the fly.

Tying Spey flies using ring-necked pheasant rump feathers is also an option. These are readily available online and in some fly shops. They work well, but the stems are very short. If a pattern calls for Spey cock for both the throat and the body hackle, use two feathers—one for each section—even if you are just covering the front half of the fly. The availability and cost are good, but the consistency varies a great deal. Some clumps have very short feathers, others have feathers with every other fiber broken off, and I’ve had some with almost no usable feathers. They are, however, a decent, low-cost alternative to blueeared pheasant, and they come in various dyed colors. If you get lucky and find good feathers, they are a bargain.

Burned goose secondary feathers are also popular as a substitute for Spey hackle, although some guys hate them. When used properly, however, they are a decent substitute for either heron or Spey cock hackles, but they require a lot of processing. Much of the burned goose found in fly shops is brittle, the fibers are too short, and you must still split the stems. I process my own goose feathers—I tied many of the flies in this article using these feathers—and am pleased with the results.

There has been a resurgence of interest in Spey flies here in the Midwest, and I’m often asked about them at our local fly fishing shows. They are challenging to tie, but not as difficult as classic full-dress salmon patterns. I hope you enjoy tying Spey flies!

Eric Austin is a regular contributor to this magazine. In addition to his terrific articles, he also has one of the very best websites full of classic patterns and outstanding tying tips. Learn more at www.traditionalflies.com. Eric lives in Ohio.

How to tie a Lady Caroline Spey Salmon fly from FlyTyingArchive on Vimeo.